‘No Country For Bold Men…’

(Even though it’s been 7 years since the original Broken Saints flash series was completed – and 4 since the DVD set came out in North America – I’m still blessed to receive some incredible messages from old and new fans on a semi-regular basis.  Below, you’ll find what amounts to the first ‘theologically hardcore’ analysis of BS from a…ummm…’professional’ point of view!

I was always hoping to stir up some spiritual discussion with the series, so this mail made me extremely happy.  Respect and appreciation to Wes Kelley for taking the time to write…and for reminding me that it pays to put in the obligatory research hours 8) )

“I’m a young Christian pastor, age 26, in the United Methodist Church, a mainline Christian denomination in the US, analogous to the United Church of Canada up north. A friend just let me borrow the Broken Saints DVDs to watch, and I became engrossed. Broken Saints touched off with me in so many ways! At the end of it all I was just like, “Yes!” The Saints narrative touched on so many intersections, political, spiritual, technological, more, all in a sci-fi universe. It really is my cup of tea.

First though, I thought your christological portrayal of Shandala was absolutely compelling. It almost brought tears to my eyes! Shandala’s christological significance was not just a cheap-easy, one-to-one symbol, like some films do by making just anybody who makes a self-sacrifice or has a tragic death into a Christ-figure. No, you built that thing up from early on, weaving it in a nice point/counter-point kind of way with the visceral, perverted effigies of Bula the cat and Shandala’s adopted mother. The cross, the ancient instrument of torture, execution, and Roman power, you re-appropriated as the symbol of technological, military, and commercial violence. Damn! Perfect that Lear crucifies Shandala on the technological instrument. And then that same instrument of death, the technological cross, she actually uses to overthrow Lear, and send blessing to everyone in the world. That is Christus Victor like nothing I’ve ever seen. Although in my theological circles, we discuss this progression as the most sacred mystery of Jesus’s atonement, never before have I seen it presented narrativally in our times, and in the sci-fi world no less!

END_OF_DOCUMENT_TOKEN_TO_BE_REPLACED

BACK TO THE OFFICE… 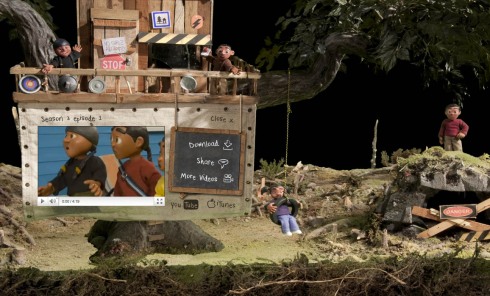 Stuck behind a desk?

I will think of you fondly

as I play with dolls

In Brightest Day, In Blackest Night...they'd better have that damn script TIGHT!

GREEN LANTERN was my childhood hero.  Everyone else argued over the superiority of the Big 3 – SUPERMAN (’cause he could punch the Sun), SPIDERMAN (’cause he had the best cartoon), and BATMAN (’cause he was a filthy-rich sociopath with crazy toys).  Meanwhile, I worshipped the cocky, womanizing jet pilot with the magic ring given to him by a dying alien from a cosmic police force.  Yeah…I was weird kid.  Surprised?

Looking back, GL’s deeper appeal was clear – he was the first spiritual superhero.   Consider this:  he is given the gift/burden of near-infinite Cosmic Energy – GREEN Energy (think which chakra that corresponds to, kidlets) – and has the power to manifest any construct he can think of.  Anything.  And his only limitations?   Imagination…and the ability to overcome Fear.

Because of my deep love and respect for the character – as well as the obvious evolutionary path of the ‘comic book movie’ thanks to increasingly photorealistic CG – a Green Lantern pitch was the first ‘spec’ treatment I ever wrote.   I did it purely for ‘fun’, and had no idea if I’d ever share it with anyone, let alone ‘Very Important People’.   Now, I often joked (and still do) with fellow creatives that, for me, writing is like taking an extremely large bowel movement filled with long shards of glass (and, before I have a chance to heal, I’m inevitably forced back on the crapper).  But you know what?  Minus the usual self-imposed pressure, writing that bad-boy was honestly easy. Like a summer breeze.  No intestinal damage whatsoever.

END_OF_DOCUMENT_TOKEN_TO_BE_REPLACED

On Fiction, Self, and Circles

If anyone knows this woman, please make sure she learns that her future husband is currently in Canada but will join her in southern France shortly 😉

Something wicked this way comes...

In your hands late Fall

Follow the Signs...open your Heart...and you will find It.

Working on another draft this month…

Should have more to talk about by summer’s end…

But if I’ve learned anything from my time on the prairies, it’s the age-old lesson regarding eggs and baskets…

The Way is one of five projects currently in development.

Smoke on that…and enjoy your summer 8)